At our last meeting, Pyons Group Parish Council decided to support Anthony Drew’s proposal to display his chaffer on Westhope Hill, just outside his property at Backwoods.

Before reader’s imagination strays too far, I should explain that a ‘chaffer’ is a machine which was widely used on farms and small-holdings for chopping and mashing up hay and root crops for use as animal feed. The machine was manufactured by Henry Bamford, who produced many other types of farming machinery over a 100-year period from 1871-1971, and were based in Uttoxeter.

There isn’t a record of any other complete, working example on show, based on current knowledge. It has also an unusual ornamental finish (possibly from use as a show model) and shows little sign of use, with no wear or damage.
The proposal is that a small shed be built to display the machine under the Permitted Development Rights of Local Authorities, which would be adjacent to the footpath passing Anthony’s house. Once built, the Group Parish Council will insure the chaffer and shed under the council’s policy.

All costs arising from building and displaying the chaffer will be borne by Anthony, and we would like to thank him in his generosity and his gift to the community. 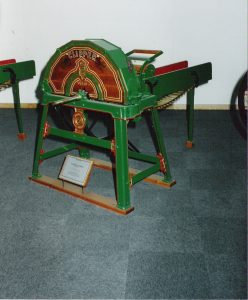 The photo is of an identical model on display at the Bamford Museum.

How we protect your data

You live locally? Want to know what’s going on? Subscribe and get updates. — Its FREE